Founded in 2003 in northern France, (now called the Hauts de France region), the Association Latitudes Contemporaines created a festival which focuses on new forms of live performance, in which the body is a primary component. Since its creation, the Festival has characterized itself as an open space for artistic approaches committed to aesthetic, sensitive and/or relational research with its audiences. Key words which apply to the Latitudes Contemporaines Festival are: experience, curiosity, trans-discipline, creative diversity and creativity, and it is considered an excellent place for cultural encounters in tune with the times, targeting a complex, dense multi‑bordered region.

Throughout the year as well as during the Festival, the staff at Latitudes Contemporaines, accompanies and develops projects led by several artists, on an ongoing and long-term basis. Using its international network and the considerable skills of its team, it is an excellent and expert resource, supporting and accompanying a number of artists and their work.

Latitudes Contemporaines’ horizons extend well beyond its geographical, political or economic frontiers. As a player in European development, the association participates in European projects and drives others. 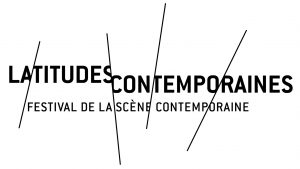